Satellites became important assets in the modern technological environment, as they are used in different areas and provide many useful functionality. In the current GPS system, there are 32 earth-orbiting satellites. Twenty-four of them are used for triangulation processes and the eight others serve as supportive assets to keep a precise timing. We call it the Galileo constellation, 24 satellites at 23500 kilometers from the earth. 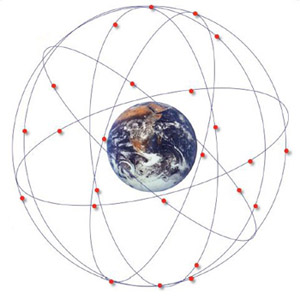 Timing is very important when it comes to geolocation and device tracking. A millisecond difference can have a bad impact of the accuracy of the tracking. If the satellites that conduct the tracking are not properly synchronized, the margin of error will increase and thus the precision of the locator that will won’t be able to generate the right position.

However, you do not need to worry about this, scientists resort to the “support satellite” that contains an atomic clock. This clock works as a reference for the satellites that conduct trilateration and keep them synchronized.

Control center are in charge of verifying the system status and check if everything is going as it should be. They also run orbit calculations to determine the position of each one of the 24 earth orbiting satellites (With the earth as the distance reference). It is not possible to find the location of a device, if we have no idea about the satellite’s position. Every 100 minutes, ground stations communicates their precise orbits to the satellites, which allows the signal receivers like the GPS feature on our phones to run the tracking.